Supplier of chemical and catalyst

Producer of all kind of insulating & refractory fire bricks

What is Activated Carbon? 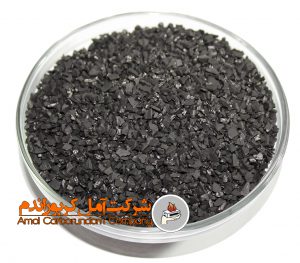 Due to the very high number of cavities of activated carbon, one gram of it has more than 3000 square meters of the contact surface. Many processes may be performed only in the presence of a high contact surface, which is possible by this material.

Activated carbon is commonly used as charcoal and sometimes as biochar (coal made from plant biomass and agricultural waste). It is also known as activated charcoal when derived from coal or corn. (The word coal is sometimes written as coal) .

This material is used in the following cases and processes:

Production of hydrogen chloride in the dark

And many other applications

Activities of activated carbon in industry

One of the major industrial applications of activated carbon is in the process of increasing the durability of metals (Metal Finishing) to purify plating solutions. For example, this process is the main purification technique for removing impurities from nickel-plated solutions. The use of activated carbon removes these impurities and brings the plating process to its desired level.

Applications of activated carbon in medicine

Activated carbon is used to treat poisoning and chemical overdoses. Activated carbon pills and capsules are used in many countries as over-the-counter medicine to treat diarrhea, indigestion, and bloating.

However, activated charcoal shows no effect on flatulence and diarrhea, and when poisoning is caused by eating corrosive substances such as alkalis and strong acids, iron, boric acid, lithium, petroleum products, or alcohol, Normally and medically ineffective. It should be noted that activated carbon does not prevent the absorption of these chemicals into the human body.

Improper use (for example in the lungs) leads to pulmonary aspiration, which can sometimes be fatal if immediate treatment is not started.

Activated carbon with a weight percentage of 50 with Celite is used as a static phase in low-pressure chromatography for the separation of carbohydrates. It is also useful for extracting direct oral anticoagulants (DOACs) from blood plasma samples.

Carbon adsorption has many applications in the removal of pollutants from air or water both in normal environments and in industrial processes such as the following:

Activated carbon purification is an effective method of water purification due to its multifunctional nature. There are a variety of activated carbon treatment methods and equipment that are selected depending on the type of pollution. It is also used to measure the concentration of radon in the air. 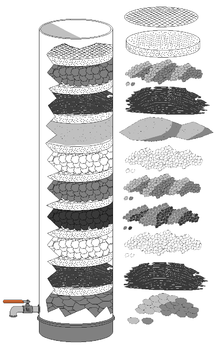 Another application of activated carbon is its use in agriculture, especially in livestock. For example, it is used as a pesticide, feed additive, auxiliary processing and disinfectant.

Research has been done on the capabilities of activated carbon to store natural gas. Porous materials act as adsorbents for various gases. The gas is adsorbed to the carbon substance by van der Waals forces. The adsorbed gas can then be expelled when exposed to higher temperatures. Or be burned to produce work or to extract hydrogen gas for use in hydrogen fuel cells.

Storage of gas in activated carbon is an interesting storage method. Because gas can be stored at low pressure, low mass, low volume environment, which is much more economical than large pressurized tanks.

Activated carbon filters are commonly used in compressed air and gas purification to remove oil vapors, odors and other hydrocarbons. The most common designs are the initial use of 1 or 2 stage filtration in which activated carbon is embedded in the media filter.

Activated carbon is commonly used on a laboratory scale to purify solutions of organic molecules that contain unwanted organic dye impurities. Large-scale laboratory filtration of materials on activated carbon is used for this purpose in the chemical and pharmaceutical industries.

Activated carbon are complex compounds that are difficult to classify based on their behavior, surface properties, and other basic criteria. However, there are a number of broad classifications based on size, preparation methods, and industrial applications.

Usually, activated carbon (R 1) is made in special forms in the form of powder or fine granules with a size of less than 1 mm and an average diameter between 0.15-0.25 mm. Therefore, these types of activated carbon have a high surface to volume ratio with a low penetration distance.

Powdered activated carbon are finer particles. These materials are obtained by crushing or crushing carbon particles, 95-100% of which pass through a specific mesh. Due to the high energy waste of this product, it is not common to store them in a special container. Instead, it is usually added directly to other process units involved in the separation and deposition of water. 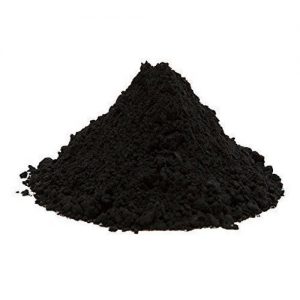 The particle size of granular activated carbon is relatively larger than that of powdered activated carbon, so it has a smaller contact area. These types of carbon are useful for the process of absorbing gases and vapors because they penetrate quickly. 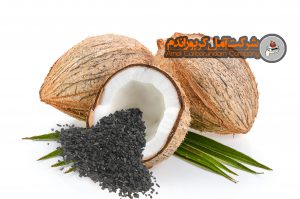 One of the physical properties of activated carbon is the iodine number. Iodine number is the amount of iodine consumed by 100 or one gram of a substance. This number is often used to calculate the amount of unsaturation in fatty acids and hydrocarbons. This number for activated carbon indicates the level of activity of this material and the availability of its cavities to absorb materials, so that the higher the amount, the higher the level of activity of the material.

This number is usually reported as mg / g and is in the range of 1200-500 for activated carbon. For example, for water treatment industries, the iodine number should be in the range of 100-100 mg / gr .

It is a measure of the amount of activated carbon resistance to scratches and abrasion. Depending on the raw materials, the hardness will also vary.

Some carbons have a mesoporous (semi-porous) structure that absorbs some medium-sized molecules, such as methyl blue ink. This parameter is expressed in different units such as mg / g . This parameter is reported for activated carbon 280-110 mg / gr .

The smaller the size of the activated carbon particles, the better the contact surface and the faster the adsorption rate. In steam phase systems this must be considered in contrast to the pressure drop, which will affect energy costs.

Other physical properties of activated carbon 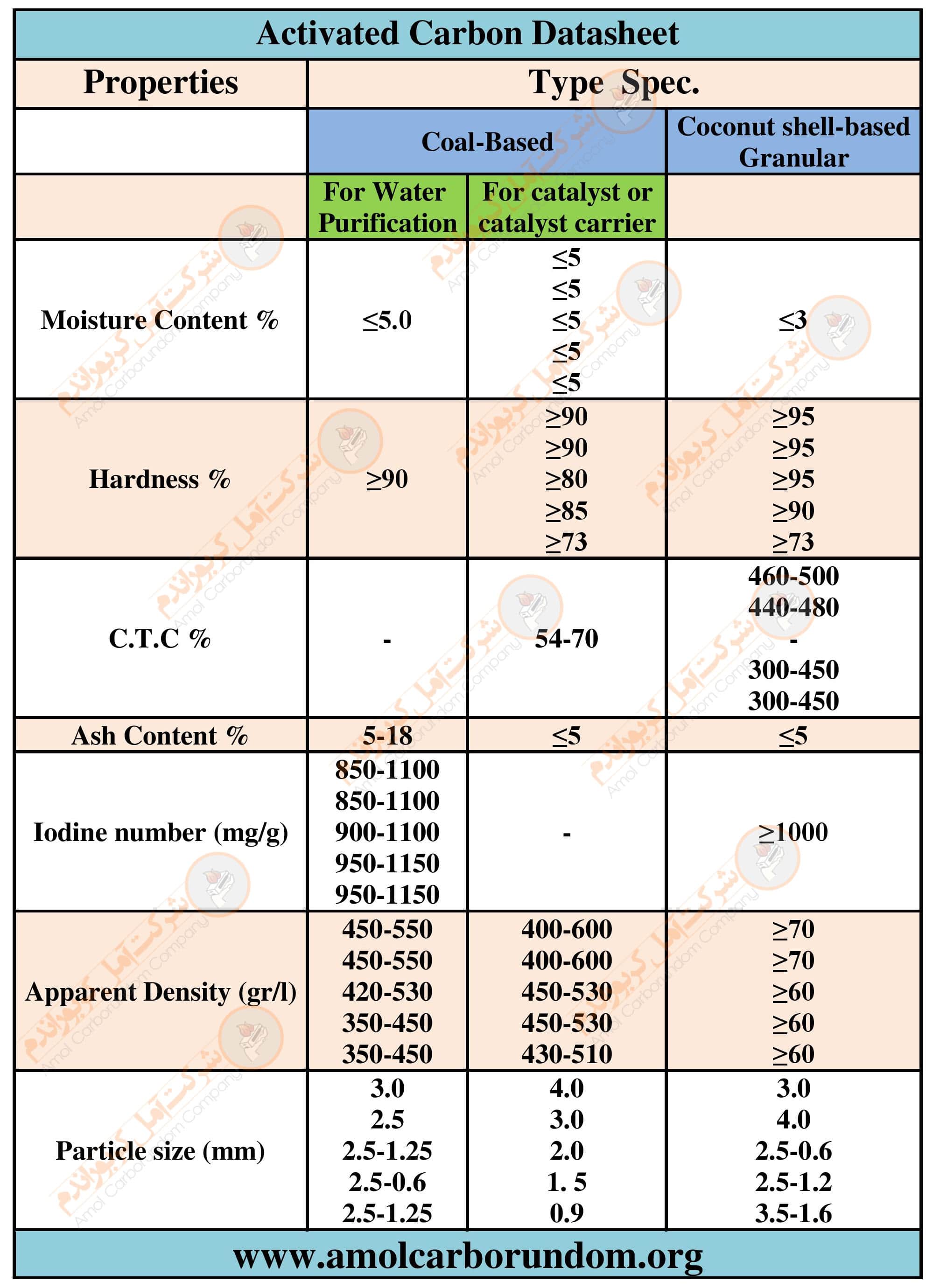 Activated carbon is carbon that is made from carbon source materials such as bamboo, coconut husk, wood, coconut husk fibers, brown coal, coal and bitumen. In the following, we will get acquainted with the methods of producing activated carbon with coal and coconut skin.

Activated carbon is produced from coconut skin in the following two steps:

Step 1) The first step in activating carbon is to carbonize the skin by expelling about two-thirds of the coconut skin volatiles. This creates a carbon mass with small cavities.

Second stage) In the second stage, this carbon base is activated at high temperature (about 1100 ° C) in water vapor. Activation temperature and amount of activation time are important for creating internal cavity networks. In fact, the whole activation process determines the unique characteristics of the activated carbon produced.

One way to produce activated carbon is to use coal or charcoal. In this method, the desired material is obtained in different forms such as powder or granular. In this method, water vapor passes through these materials and acts as an activator, thus creating millions of holes on the carbon surface. Activated carbon produced from coal is of great interest in gas phase treatment, drinking water treatment and wastewater treatment.

You can contact Amol Carborundom for ordering the products through the link below.
Contact us
PrevActivated Alumina
Sodium Cyanide (NaCN)Next